Android /
Games /
RPG /
Romance of the Three Kingdoms: The Legend of CaoCao

Romance of the Three Kingdoms: The Legend of CaoCao

Join CaoCao in the conquest of the Three Kingdoms 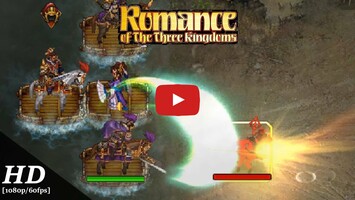 Advertisement
Romance of the Three Kingdoms: The Legend of CaoCao is a new installment in one of the longest sagas in the history of videogames, spanning a period of over 30 years, more than 20 games, and more than a dozen platforms.

In this case, we meet up with one of the legendary generals from the Three Kingdoms, Cao Cao, in his attempt to finally take full control of the nation. In order to do this, as usual, you'll have to recruit tons of heroes to help you in the battles. Most of the heroes are also well-known faces from the saga, such as Liu Bei, Zhao Cen, He Jin, Dong Zhuo, and Sun Jian, just to name a few.

The battles are the cornerstone of Romance of the Three Kingdoms: The Legend of CaoCao, and without a doubt, the best thing about the game. When it's your turn, you can move your units and carry out any type of attack or skill that each one is able to do. That said, you have to keep a few things in mind, including counterattacks from the rival units and even the weather conditions. For example, rain can make lightning spells more effective, while a sunny day can help with fire spells.

Romance of the Three Kingdoms: The Legend of CaoCao is an excellent SRPG belonging to one of the most prestigious sagas of the genre. It's a colossal title with a ton of missions and enormous units, in addition to having absolutely charming pixelated graphics. And as if that weren't enough, the game also offers an asynchronous PVP mode where you can battle against other generals online.
The top Android games of 2018

Last year, the Uptodown Game Awards were born; an initiative in which our team of editors selects the best Android games released throughout the year according to their categories. The feedback was so great that we decided to do it again this year, with our selection of the best games released in 2018.
See more

The top 10 SRPGs available on Android

Talking about strategy role-playing games means talking about one of our favorite genres. It's not the first time we've written about games from this genre, and it surely won't be the last. This is logical considering that we think it's one of the most enjoyable genres for mobile devices given the good use of touchscreens and the pace of the games. This is why we've put together a selection of the best SPRGs available on Android.
See more

The top ten Android games of the month [March 2018]

The sun has started to peek out from behind the clouds and Spring is finally underway. The month of March left us with a bunch of excellent new games on the Android ecosystem. So many, in fact, that it was tough to select just ten for our illustrious list. But that's not such a bad problem to have, especially when some of the most highly anticipated games finally came out this month. Without further ado, here are the best Android games of March.
See more

Similar to Romance of the Three Kingdoms: The Legend of CaoCao

Brawl Stars
3-on-3 battles from the creators of Clash Royale and Clash of Clans
League of Legends: Wild Rift
The MOBA king deploys its arsenal on Android
Naruto: Ultimate Storm
A beat' em up based on Naruto's adventures
FNaF World
An RPG protagonized by the Five Nights at Freddy's characters
Avakin Life
An open and free world where you can meet new people
Naruto: Slugfest
The official Naruto MMORPG
Genshin Impact
An open world RPG with eye-popping visuals
LifeAfter (Global)
Cling to life in a hostile world
Advertisement